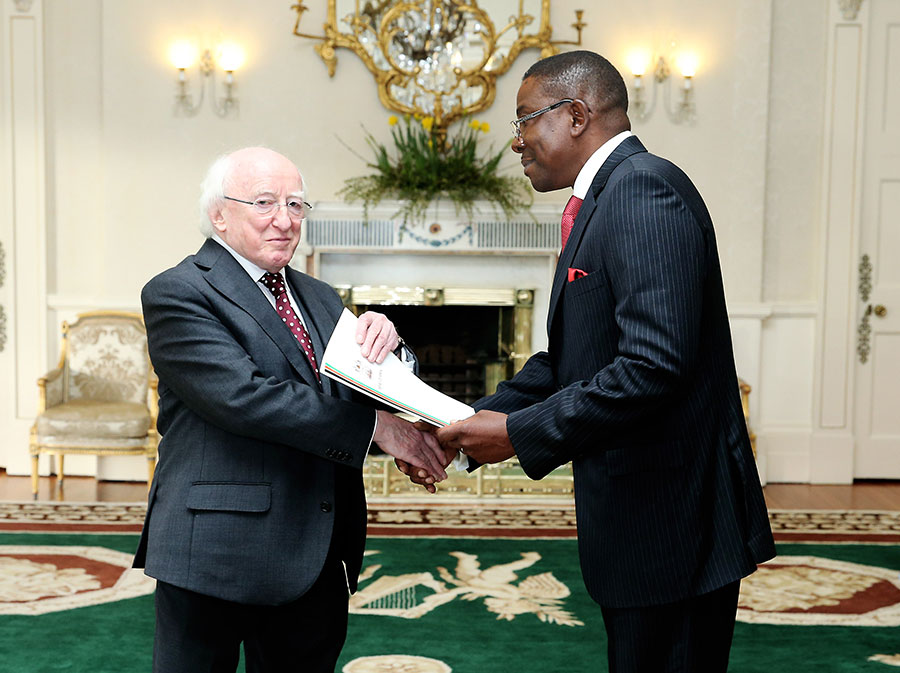 H.E. the Ambassador Richard A. Opembe is the new Kenyan Ambassador to Ireland. On Tuesday 20th January, 2015, he presented his Letters of Credence to H.E. Michael D. Higgins, President of Ireland at Áras an Uachtaráin. During the presentation of his Letters of Credence, the Ambassador was accompanied by his spouse Mrs. Suzanne Wanjiru Gachukia Opembe and  three children, Mr. Jesse Eshikhati Opembe; Ms. Appelonia Chao Opembe; Mr. Miles Khayumbi Gachukia Kibukosya. Also accompanying the Ambassador for the occasion was Mrs. Immaculate N.Wambua, Minister Counsellor at the Embassy.

H.E. the Ambassador was escorted to and from Áras an Uachtaráin by an Escort of Honour consisting of a motorcycle detachment drawn from the 2nd Cavalry Squadron, Cathal Brugha Barracks, Dublin, under the command of Lieutenant Fionn McCaffrey.

A Guard of Honour was provided at Áras an Uachtaráin by the 3rd Infantry Battalion, Stephens Barracks, Kilkenny, under the command of Lieutenant Steve Byrne.