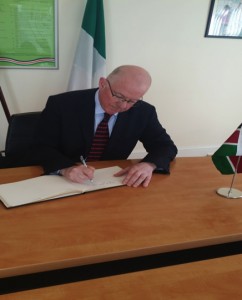 Mr. Charles Flanagan TD, Minister for Foreign Affairs and Trade of Ireland visited the Embassy on Wednesday 8th April, 2015. The Minister on behalf of the Irish people sent his condolences to the families and loved ones of those who died, to fellow students, to the Kenyan Government and people. The Terrorist attack occurred on 2nd April, 2015 at Garrissa University College.

Mrs. Immaculate Wambua, Chargè d’ Affaires a.i. was present to receive the Minister at the Embassy during his visit to the Embassy.